Penguins - What to do with them? 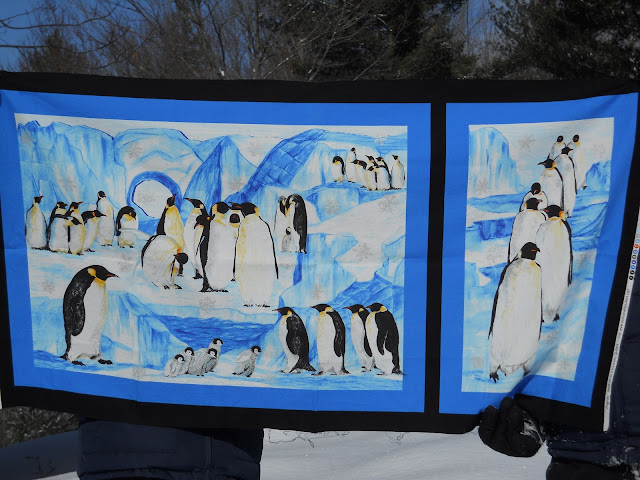 I bought a kit to turn this panel into two wallhangings for my five year old.  They just needed backing and binding, nice and easy.  When I ordered it, I made sure he knew wallhangings hang on walls.﻿  He said he understood, and even started to pick out where they would go.
But when I was getting ready to cut the sections apart, he was talking about 'cuddleing' his penguin quilts.  I explained the whole wallhanging thing again, but now he was determind, this was going on his bed to cuddle with, not on the wall (sometime while I was unawares, putting a hanging sleeve on the back of penguins was apparently made criminal).  Oh, and now the panel has to stay as one piece, because apparently the penguins on the right are related to the penguins on the left, and they would miss each other if I cut them apart.  (I think he has named each penguin)
I don't know why I was surprised by this.    :)
So, now I've got no plan, and a five year old who is impatient for his penguin quilt.  I do want this to be twin size, because he already has enough smaller quilts and blankets. 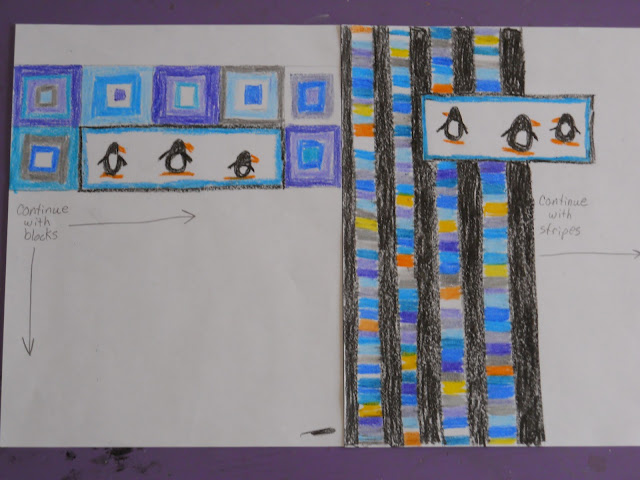 Ok, I know there are more high-tech ways of designing quilts (I even own EQ5) but I still prefer pencil and paper.  Plus I still love to color with crayons  :)

My first Idea was to try log cabin blocks, like the drawing on the left, in blues.  I would put the panel in the upper third of the quilt, with blocks above and below, and on the sides to make it wide enough.  But, I was afraid a monochromatic blue quilt in this pattern might be too boring (although, I'm liking it better now that I've drawn it), especially since I don't want to add borders of a focal print.
Then I thought maybe wonky log cabins?  Or stacked coins like the drawing on the right?

What do you think?  Is there something else you would suggest?  I also like the looks of the cover quilt of this book, but I've never done anything like it.  Also, would it work in monochromatic blue?

Should I add some yellow and orange? 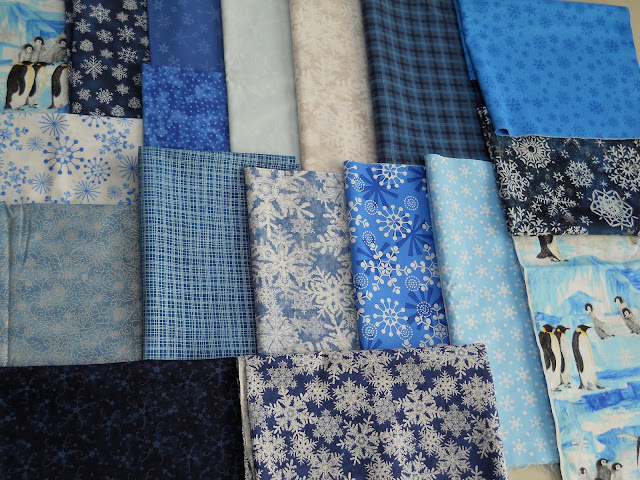 These are the fabrics I have to work with so far﻿.  I'm hoping to add more bright blues, and geometrics for interest.
These are the guide lines I've decided on so far:
-The pattern needs to be quick and easy
-No borders of a focal fabric
-not a lot of white (around here, quilts are used to build bunkers for Revolutionary War reinactments or the occaisional Mongoul invaison)
-predominantly blue
-the panel needs to be kept as one piece (it is roughly 24"xWOF)
Any ideas, comments, links to inspirational photos, would be appreciated.
Thank you so much!
Posted by Allison at 5:31 PM

No suggestions, just interested to see what you do. Like the fabrics you've chosen! And I think you probably couldn't do wrong with just plain borders, maybe the dark blue right next to it to set it off and then maybe a border of four- or nine-patch in the different snowflake patterns (but I'm fond of square patch blocks), followed by another quiet border, maybe that bright blue with dots. Okay, I guess I had a suggestion.

I think the cover of that book would look great in the colors you have chosen. If you do that liberated pattern, maybe place the penguins in yellow or orange "frames" on the quilt? Or, do that pattern, but break it up with a horizontal strip of white with penguins in it?

I bet you'll find something great!

My vote is for the blue. That way the penguins will really pop. And that's his priority, right?

Maybe the odd little bit of orange, just like on the penguins. Just make a whole bunch of improv/wonky logs. You've got a great group of fabrics so far.

I'm much more drawn to the stacked coin design because of the orange touches. Whether you go with coins or cabins, for me would depend on which pattern I'd rather make. I don't think I could leave the panels connected. I'd make the smaller one into a pillow cover and use the larger one in the quilt 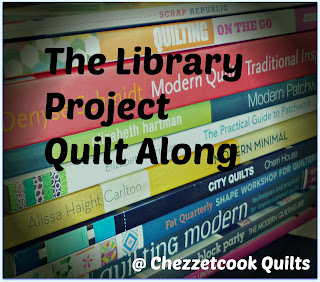